Have I just found a rare coin? It’s a question which collectors ask daily, and to help answer it, Change Checker have put together these charts listing each coin in order of its rarity.

Others to look out for include both 2008 and 2012 Olympic Handover Two Pound Coin designs.

Themes have followed a similar pattern over the years with the four constituent countries of the United Kingdom being represented in cycles. The rarest One Pound coin currently in circulation is the Edinburgh £1 which was part of the series depicting the capital cities of the UK.
The Edinburgh design is the only £1 coin with a mintage below 1 million and by way of comparison, over 443 million Royal Arms shield £1 coins were issued in 1983.The 2011 Cardiff £1 and the 2010 London £1 follow closely behind, so all very sought after £1 coins to have.

Another coin to look out for is The Royal Arms £1. Although this is a common design which is regularly ignored, make sure to look out for one with a 2008 date – that’s actually the fourth rarest £1 coin. 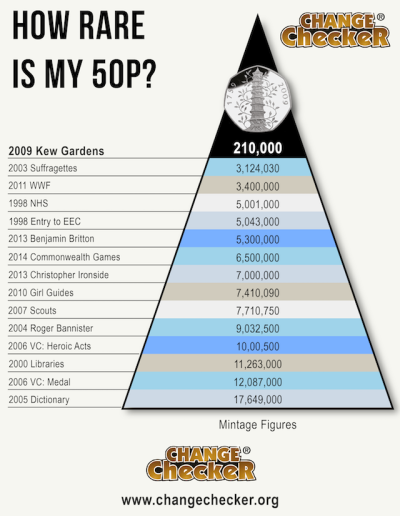 The rarest coin in circulation, of any denomination, is the Kew Gardens 50p. the Kew Gardens 50p has been valued at up to £50 on online marketplace eBay. Its status as the most scarce coin has been well publicised, and as a result, many are hoarded by collectors. This chart illustrates just how rare it is compared with other Fifty Pence designs.

The Olympic Fifty Pence series is very popular with Change Checkers, but in terms of rarity, there really isn’t much separating the top 10 designs. The Football ‘Offside Rule’ 50p was certainly one of the most talked about designs, and it also narrowly ranks as the scarcest.

So, keep hold of your coins. You never know what they might be worth in the future! And remember you can Find, Collect and Swap all your coins for FREE with the Change Checker App: www.changechecker.org